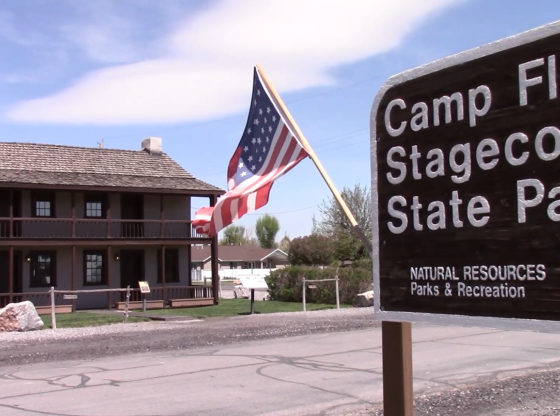 Reece and Marianne Stein are visiting this one-of-a-kind State Park which is rich in history!

Opened to the public as a State Park in 1964, Camp Floyd, named in honor of Secretary of War John Floyd, was built by the army with the help of local citizens. The Army pumped nearly $200,000 into the local economy to build Camp Floyd. Camp followers soon increased the population of Camp Floyd and Fairfield to 7,000, making it the third largest city in the Utah territory. At their height, Camp Floyd was the largest military installation in the United States.

Used as a strategy by both the Northern and Southern States, Camp Floyd and the Utah War were an attempt to divert the nation’s attention from the issue of states rights and slavery, to the Mormon problem and polygamy. Buchanan believed that Democrats and Republicans, northerners and southerners, could unite in an attempt to restore order to Utah, and he could thus divert attention from the crisis over slavery and tensions between the north and south. John Floyd, Secretary of War, also encouraged him, along with other southern Democrats. They also saw the potential to deplete the U.S. Treasury of millions of dollars by giving government contracts for the move, to southern businessmen and to turn the west from northern sympathies, by creating support for southern state’s rights.

In 1861, the army left for the Civil War. Some $4,000,000 of Army surplus were sold for a few cents on the dollar. The names of those who participated in the Utah campaign, read like a “who’s who” in Civil War Generals. Rosters include names like Johnston, Buford, Reynolds, Bee, Heath, Lander, and others. Nearly all the buildings erected by the army were dismantled or demolished before their departure. Today, all that remains is the Commissary Building, which serves as a Camp Floyd museum, and the cemetery.